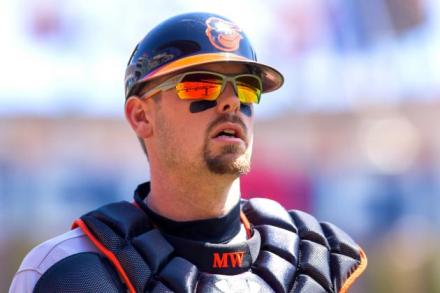 Now that Matt Wieters has agreed to terms with the Washington Nationals on a two-year contract, Orioles fans can finally move on…and stop thinking of scenarios that would land him back in Baltimore on another one-year contract.

The team moved quickly this offseason to replace Wieters, anticipating that agent Scott Boras would demand an investment far greater than the Orioles were interested in making.  (Interestingly enough, Wieters’ price tag ultimately proved to be much cheaper than many expected.) So on December 16, the Orioles signed Welington Castillo – most recently of the Arizona Diamondbacks – to a one-year contract with a player option for 2018.

Before Castillo takes over as the O’s new backstop, however, let’s take a look back at the 7 ½-year Oriole career of Matt Wieters.

Just how good was Wieters?

Let’s take a quick look at where he among the best Oriole catchers of all time?

Here are some “Matt Wieters Facts” – to borrow a long-lost phrase:

So in looking at where Wieters ranks statistically among the all-time Orioles catching leaders, it’s fair to say that he will clearly go down as an Oriole “Hall of Famer” – and one of the three or four best ever to play the position in Baltimore.

But it’s also fair to say that he ranks behind Hoiles, certainly, and possibly also behind either Dempsey…Triandos…or both.

Personally, Triandos’ career was before my time – so it’s tougher for me to say.  But I’d rank Wieters as the Orioles’ second-best catcher of all-time, a notch below Hoiles but comfortably ahead of Dempsey.

Had Wieters come to the major leagues as, say, a fourth-round draft choice – with little to no hype – his Baltimore career would no doubt be viewed in a much different light.

But Wieters carried the burden of high expectations – thanks to his status as a first-round pick…his “super-prospect” status…and the pressure on him to help turn around the team’s fortunes.

The once-hilarious “Matt Wieters Facts” web site now seems like a distant memory, but I look at Wieters’ 7 ½-year run in Baltimore as a success.  While he struggled to return to form after his 2014 injury, he was one of the team leaders during a stretch – from 2012 to 2016 – where they won more games than any other team in the American League.

Statistics show that Wieters is clearly not the best catcher in O’s history.  And defensive metrics – specifically the relatively new pitch framing metrics – suggest that he might be vastly overrated at present.

But Wieters was highly respected by his Baltimore teammates…and he was greatly valued by manager Buck Showalter.  I place a great deal of emphasis on statistical analysis…but I also find it hard to believe that Showalter was wrong about Wieters’ value as both a defender and a team leader.

While it will be strange to see him wearing the Walgreen’s logo on a red baseball cap this season…I still look forward to the ovation Wieters will receive when he returns to Camden Yards this May.