I hate to be the bearer of bad news, but…in addition to the problems the Orioles are facing with their own roster, there could be an even bigger problem looming for the O’s – and the rest of the American League East.

The New York Yankees have a young slugger who is right now taking Major League Baseball by storm.

In fact, I’m so sick of hearing about this player and his “prodigious home runs” that I can’t even bring myself to type his name.

But as painful as this is to consider, the emergence of such a talented young player on a team with virtually unlimited financial resources could mark the beginning of a new Yankee Dynasty.

Predictably, Yankees fans are going crazy for their new slugging superstar – with a dedicated section in the right-field stands where fans regularly pay homage to his famous last name.[i]

According to the Los Angeles Times, the Yankee slugger “has a swing that is built for Yankee Stadium.”  The Times article went on to report that he “has hit a homer every 9.5 at-bats. Babe Ruth hit one every 11.8 at-bats over the course of his career; Ted Williams one every 14.8; Willie Mays one every 16.5; Hank Aaron one every 16.3.”[ii]

The Washington Post referred to the new Yankee star this way: “How else can his rookie-year exploits be described except as positively Ruthian?  Yet even that most glowing of baseball superlatives fails to do justice to (his) virtually unprecedented beginning, for it was not until Babe Ruth’s second season of playing the outfield that the Sultan gained his full measure of swat.”[iii]

Whoa…they’re saying he’s actually better than Babe Ruth at this point in his career?!?!

The slugger himself even seemed to be shocked at how well he’s done early in his first full season, saying, “That I’ve hit for power isn’t surprising…how fast I’ve been able to do what I’ve done is a little surprising.”[iv]

And the slugger’s manager – as you’d expect – is thrilled with his young power phenom, saying, “When he hits them, there’s no doubt…He’s an exciting kid…we’ve got some kids here to build around, and he’s certainly one of them.”[v]

The manager went on to add, “He’s the kind of kid you like to see good things happen to. You worry about a kid getting a big head from something like this, but he remains very level. I guess he won’t keep up a pace like this, but he should be a very consistent home run hitter for a lot of years.”

Even his opponents have taken notice, as evidenced by this passage in the Post:

“His legend among opponents is growing by word of mouth from his batting-practice power exhibitions and by TV viewing. “I’ve never seen him play in person before, but I know all about him from watching some of those tape-measure homers on ESPN,” one Orioles pitcher said.”[vi]

There’s only one “catch” when it comes to everything I’ve just told you about this Yankees slugger.

Every single one of those was from 1990 – and they were about Kevin Maas…the new “Yankee Slugging Sensation.” 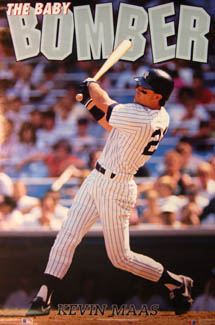 If you’re old enough to remember the name, you’ll recall that Kevin Maas took the baseball world by storm in 1990.

Everyone was on the Kevin Maas bandwagon – and the media was convinced he was the next Mantle, DiMaggio and Ruth all rolled into one.

Except that he wasn’t.

And 1991 would be his only full season in the major leagues.

So what does Kevin Maas have to do with Aaron Judge?

While I confess to misleading you a bit in this post, I want to stress that I’m not suggesting that Aaron Judge will turn into another Kevin Maas.

The chances are good that Judge will have a better – and longer – career than Maas did simply by staying healthy.

And Judge is already off to a better start.

But what I am suggesting is this:

Aaron Judge is still just 99 games into his major league career.  Pitchers haven’t adjusted to him yet…he hasn’t been around the league a few times yet…and he hasn’t been tested by the rigors of a 162-game season just yet.

So let’s hold off on the comparisons to Ruth and Mantle – which, by the way, have been just as frequent for Judge as they were for Maas.

If you’re a baseball fan, Aaron Judge is great for the game.  He’s an enormous person – with seemingly enormous talent – who hits long home runs on a regular basis.

That’s very cool – and it’s fun to see pictures of Judge next to shorter players like Jose Altuve.

I just felt like the Aaron Judge Hype Machine was turned up a little too high.  And I couldn’t help but think it was something I’d heard before.

As an Orioles fan, the thought of another Ruth or Mantle emerging in pinstripes is terrifying.  But maybe we don’t have to worry about that happening just yet.

I don’t think the comparisons coming out of New York — linking Judge to Ruth and Mantle — are good for the game…or good for Judge.  My guess is they place pressure on the young player that will do more harm than good.