Editor’s Note: Today’s post comes to us from guest contributor Jim Considine. Jim has been a Baltimore sports fan since he left kindergarten for higher academic pursuits.  His sports resume includes managing the Press Box for the Baltimore Ravens from 1996-2003, six years as a statistician for the Washington Redskins, and working in sports broadcasting of football, baseball, and lacrosse.  He is a member of SABR and has worked as a researcher for the Retrosheet. This photo depicts the mayor of Baltimore Tommy D’Alesandro Jr. as he tosses out the ceremonial first pitch at the Baltimore Orioles 1956 home opener vs. The Washington Nationals.  The mayor is accompanied by Mrs. D’Alesandro (on his right). The gentleman in the dark topcoat on his left is Governor Theodore Roosevelt McKeldin and his wife, who is named Honolulu. The Republican governor and Democratic mayor attended many events together in Baltimore city. McKeldin had served as mayor for one term in the mid-40’s.  He would return to serve a second term as the Mayor of Baltimore in the early 1960’s.

The Orioles manager Paul Richards (#12) is pictured in the lower left corner.  Paul Richards is the only Baltimore Orioles field manager who also performed the duties as the general manager.  The Orioles had opened the season with a three-game sweep in Boston. Richards needed to put one in the win column today. 1956 is in his second season with Baltimore.  His team has been the worst hitting team in the eight-team American League since moving to Baltimore. In 1955, he inherited a team that finished in seventh place, 1.5 games ahead of the last place Philadelphia Athletics. The A’s moved to greener pastures in Kansas City in 1955 as they passed the O’s in the standings, bettering their record by 6 victories. The 1956 season saw the Washington Senators drop into last place. The lowly Nats’ post-WWII years saw them finish 14 out of 15 seasons in the lower half of the American League. They were so bad that a hit Broadway musical, “Damn Yankees” was written about their futility. In the late ’50s, after finishing in last place, four out of five seasons they moved to Minnesota. The Senators’ long-time owner, Clark Griffith, had passed away in the fall of 1955, passing control of the team to his nephew/stepson, Calvin Griffith. Sitting on their bench on this opening day is future Hall-of-Famer, 20-year-old Harmon Killebrew and a 22-year-old Cuban, Camilo Pascual, who would be the best pitcher to come through the Senator system since Walter Johnson. 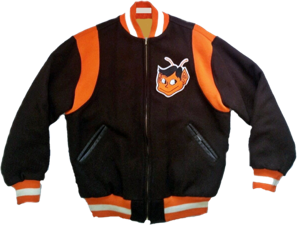 Several of the Orioles in this photo are wearing jackets from the 1953 Saint Louis Browns from whence we came.  (The jackets came free with the purchase of the franchise.) The notion of a baseball team wearing another team’s uniform is unthinkable in the majors today. However, in 1956, I doubt if anyone noticed except for the newspaper people who were covering the first pitch ceremony. Only the fans who had the best seats, closest to the field and had a good angle to look into the Orioles dugout could detect the wardrobe malfunction. The brisk weather probably occupied the minds of the fans in attendance. Nary a word was reported in the sports pages of The Sun.  The folks who were watching the game on their home television or at the local tavern were watching a black and white, over-the-air broadcast on WBAL TV.  Identifying the details of a logo on a garment worn in the dugout would be impossible based on the quality of the picture on the screen. The details you are seeing are the result of a high-resolution scan of an 11” x 17” photo that was purchased from The Sun. This picture was partially colorized to make the Browns jacket stand out. 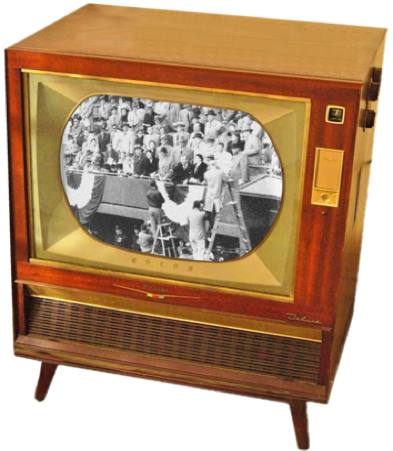 Why were the Orioles wearing the Browns’ 1953 jacket? The players were cold, and the jackets supplied by the Orioles team were thin windbreakers without much thermal insulation. The St. Louis 1953 Browns jacket was made from wool that would stand up to the chilly Baltimore day.  The weather on this opening day was a brisk 52 degrees with a steady 20 mph out of the NNW wind, (a wind chill of 44 degrees) which was blowing straight into the Orioles dugout.

In 1956, baseball teams did not supply clothing that provided comfort for every sort of weather imaginable. You made do with what the team issued.  The teams that drew the biggest crowds had the money for extra player comforts. Baltimore at that time ranked #6 out of 8 in attendance in the American League. (see Appendix)

The 29,083 fans who braved the chill only had to face the elements for a quick nine-inning game. The Orioles defeated the Washington Senators 3 to 2 in two hours and nine minutes plus the pomp and circumstance of the opening day lineup introductions. There was also a 30-second moment of silence for the departed Senators owner, Clark Griffith and the Orioles team treasurer, Howard Jones, who had passed away earlier in the week. The Orioles are wearing a black armband out of respect for Mister Jones.

At the time the photograph was taken, 11 Oriole players and coaches are in the dugout. The rest of the Orioles team are on the field awaiting the mayor’s first pitch.  In 1956, the process of the first pitch involved tossing the ball to a gaggle of players who would compete with each other to catch the ball.  Think of a bridal bouquet being thrown to the eligible women at a wedding. The Sun reported that Mayor D’alesandro, (father of the current Speaker of the House Nancy Pelosi) tossed out the opening pitch with a motion “like a sore-armed infantryman pushing a hand grenade.”  The baseball he used was a replica of the ball used in 1876. It traveled about 40 feet to the awaiting Orioles on the field.

The Orioles starting pitcher was Jim Wilson (12-18 — 3.44 era –235.1 innings), who may have been warming up with the Orioles star catcher, Gus Triandos.  In 1956 the teams would warm up their pitchers in the vast foul territory of Memorial Stadium. In 1958 the Orioles hosted the All-Star game. The team added 10 rows of premium seating around the circumference of the foul territory. They liked the idea of having this additional, prime seating and the idea became a permanent addition in 1961.  The bullpens were moved behind the chain link home run fence, a phone call away from the manager.

The big question that was on everyone’s mind on this day was whether the new shorter, home run dimensions would improve the anemic Orioles offensive output. The cavernous 1954 Memorial Stadium opened without a fence in center field.  A simple barrier was erected after opening day with the deepest dimension set at 445 feet.  Paul Richards moved the fence in by 20’ to 425’ after observing one season as the Orioles skipper. 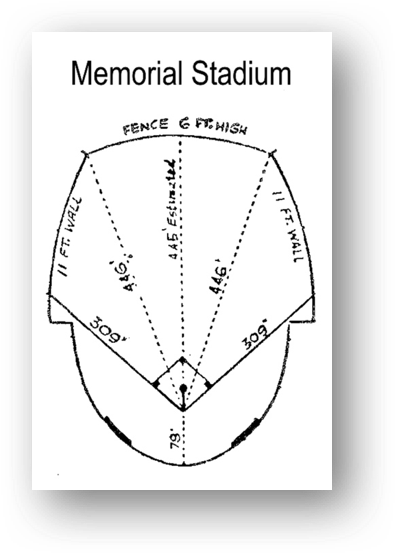 Memorial Stadium’s center field dimension was similar to the Polo Grounds (see Willie Mays’ catch in 1954 World Series).  The Orioles hit a total of 106 home runs in their first two seasons, ranking them #8 of the 8 teams in the American League for this period. Those fences would eventually creep in to their permanent location of 410 feet before Richards would be satisfied. The next time he adjusted the home run fences, he introduced an arch to the fence to reduce the power alleys from a 405-foot depth to a manageable 386 feet.  Despite these changes, Memorial Stadium was always known as a “pitcher’s ballpark.”  The new dimensions helped the Orioles to hit 91 homers in 1956, with Gus Triandos becoming the first Oriole to hit over 20 homers. We still hit the lowest amount of homers in the American League, but we also won 12 more games over the1955 season. Our pitching staff was nothing to crow about (6th out of 8), and those same boundaries that kept our hitters in check was a big help for a lousy staff.

The Orioles were the butt of a joke in the 1957 hit movie 12 Angry Men.  Juror #7 played by Jack Warden is determined to finish his jury duty in time to get to Yankee Stadium to catch that night’s game against the Indians.  He engages in conversation with a fellow juror –

The 1956 Orioles would finish ahead of the Washington Senators and the Kansas City Athletics while finishing 16 games under .500. Wait until next year! The team saw gradual improvements until 1960 when the “bonus babies” started to mature as we gave Juror Nine’s Yankees a run for the pennant. 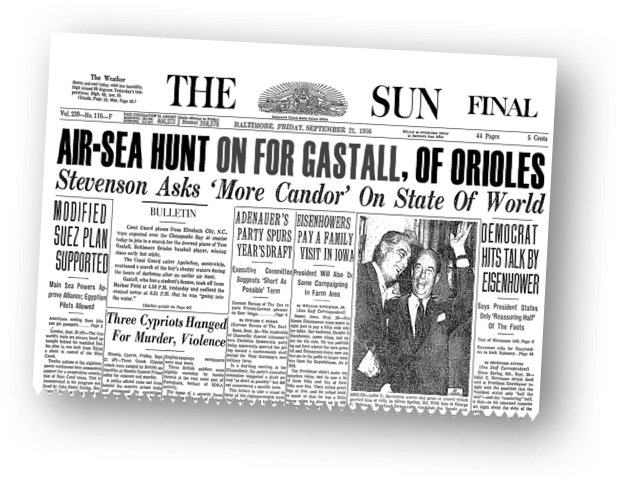 Tragedy hit the Orioles team when Tom Gastall, a rookie catcher drafted in 1955, was killed when his plane crashed into the Chesapeake Bay.  Gastall was a highly-coveted bonus draftee for the Orioles. He played quarterback for the Boston University football team in addition to baseball. The Detroit Lions thought enough of him to draft him in 1955. The Orioles signed Gastall to a hefty bonus, and Gastall had purchased the aircraft two months prior to crashing.  He was trying to get enough flying time registered so that he would qualify for his pilot’s license.  His family was from the Boston area, and he wanted to be able to fly home after the season concluded in a week. Following a workout on the Orioles day off at Memorial Stadium, he was champing at the bit to take the plane out. He radioed the tower at Harbor Field that he was “going in the water” at 6:21 PM. Search and rescue missions were conducted by the Coast Guard, Civil Air Patrol, and the Maryland Air National Guard.  His body would not be recovered for a week after the distress call. He was married and had a 15-month old son. Services were held on Saturday, September 29, 1956, at his home in Falls River, Massachusetts.

Gus Triandos represented the Orioles players at the funeral while the team played Washington in the final series of the 1956 season.

Photo credit:  The photograph of the first pitch ceremony is from the Baltimore Evening Sun Sports, page one, above the fold photograph that ran on Saturday, April 21, 1956.  This particular copy is a high-resolution scan from an 11” x 17” copy purchased from the Sun.  The limited colorization is my handy work. The photograph was originally discovered by the Uni-Watch blog — https://uni-watch.com/ 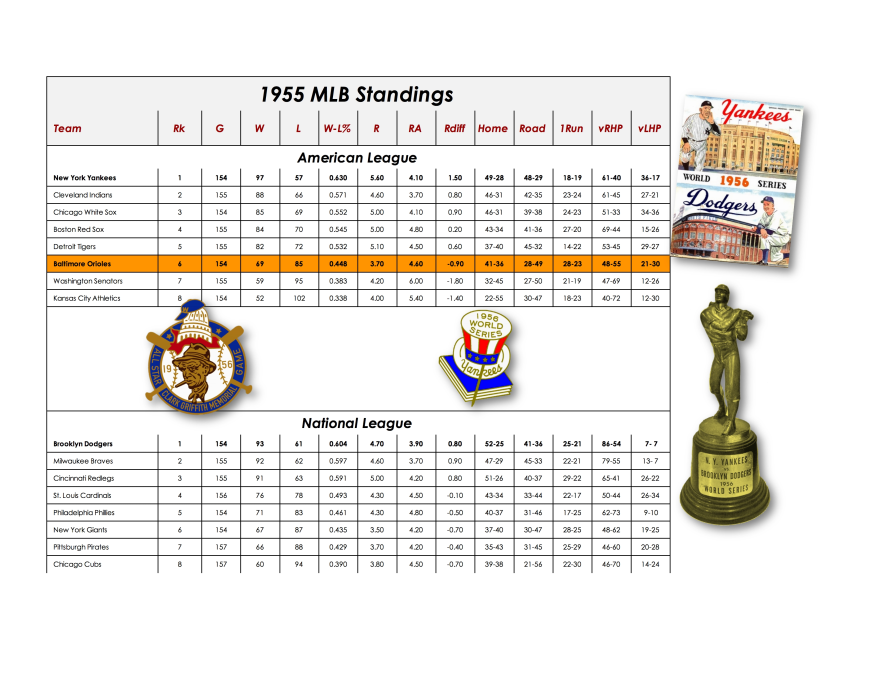 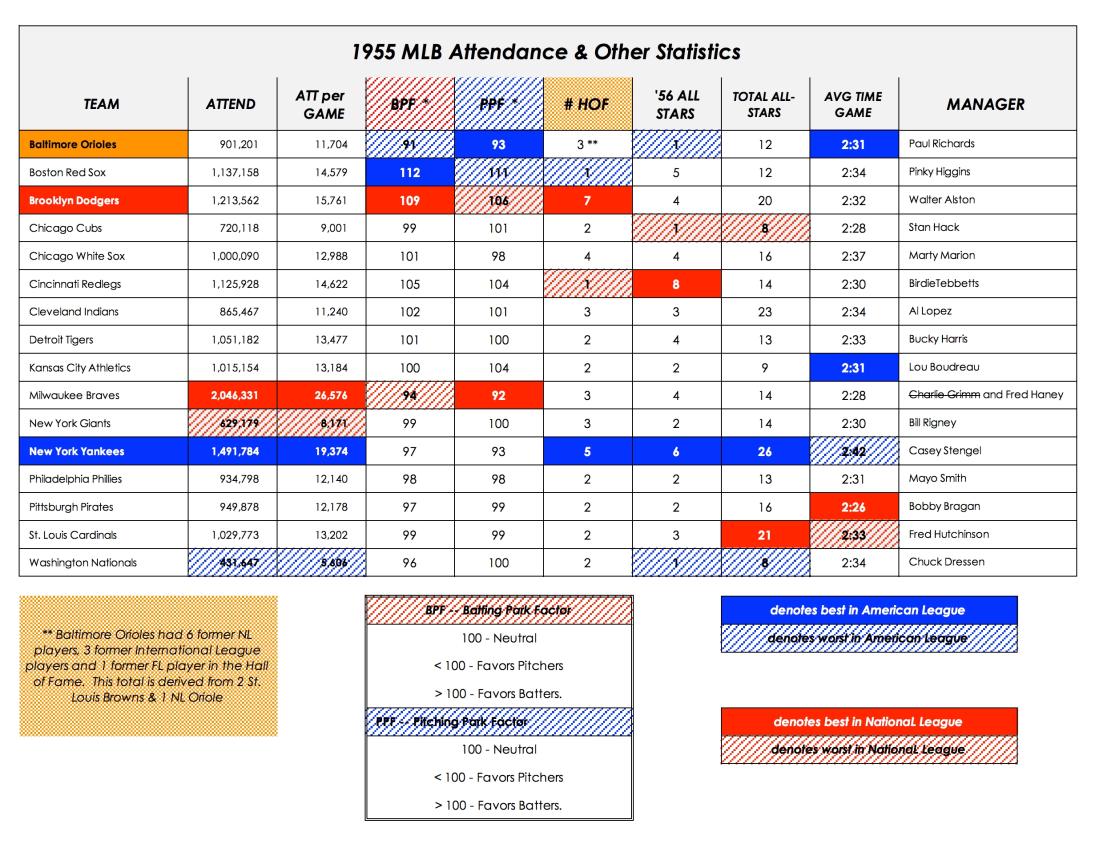 All Baltimore, all Irish, not so much a Catholic, though it is tattooed on my psyche. Moving towards my mid 60's. No complaints, Life kind of stopped beginning in the 50's. Lots of great memories and experiences will feed this platform if I ever get that disciplined to record the tales. View all posts by Jim Considine