But the former Orioles manager – back in the spring of 2009 – declared that help was on the way for the Orioles’ troubled pitching staff.  “The cavalry is coming,” said Trembley…launching a phrase that would be used mockingly for years to follow.

In fact, their failures – and a lack of organizational talent as a whole – contributed to the manager’s firing in June 2010 after compiling a record of 187-283 (.398) in parts of four seasons.

Looking back on it, I’d bet Trembley’s proclamation that the cavalry was coming was more wishful thinking than anything else.

After all, the man had to be sick to his stomach watching the 2008 Orioles pitching staff.

That 2008 staff finished 29th in Major League Baseball with a 5.13 earned run average, and they walked a whopping 687 batters that year – most in all of baseball.

The five pitchers who made the most starts for the 2008 Orioles were:

That is a great big pile of awful right there.  Out of 161 games played in 2008, the O’s starting pitchers managed just 60 quality starts…2nd worst in all of baseball.  In other words, in 62.7% of the games played that season, Trembley was making an early trip to the mound to take out his starting pitcher.

Knowing all of this…it’s easy to understand why Trembley looked to the “cavalry” and saw better days ahead.

And if you look at the five pitchers most commonly included as part of Trembley’s cavalry…he wasn’t wrong about much of the talent that was on the way.

Tillman, of course, has been the Orioles’ “ace” since 2013, pitching to a 56-30 record over the last four years with a 3.91 ERA.  Britton failed as a starter but was converted to the bullpen in 2014 and became one of the game’s top relievers.  Arrieta had to leave Baltimore to find success, but his 54-21 record (with a 2.52 ERA) in four years with the Cubs makes him one of the game’s best starting pitchers.

So while Trembley may have been correct about that group, collectively, having more talent than the 2008 staff he had been forced to watch, he was off in terms of the timing of the cavalry’s arrival…as well as the roles each pitcher might play in Baltimore.

What about the current Orioles?  With 60 percent of the O’s rotation – Chris Tillman, Ubaldo Jimenez and Wade Miley – heading toward free agency after the 2017 season…is there any talent in the minor leagues ready to replace them?

In other words…is there a “Cavalry 2.0” that we just haven’t heard about?

In fact, of the three pitchers in my list of “Orioles Cavalry 2.0” pitchers, only one – Chris Lee – is ranked among Baseball America’s Top 10 O’s prospects…and he checks in at number nine on that list.

(Examining the accuracy of scouting “experts” at ESPN, MLB.com and Baseball America is a topic for another day.)

But here’s the important point:

Even though the O’s top pitching prospect, Hunter Harvey, is working his way back from Tommy John surgery – and the other O’s top young arms (like Cody Sedlock and Keegan Akin) – are still a few years away from the majors…there just may be some more immediate help on the way.

Only this time, the O’s are smart enough NOT to bill the arrival of these young pitchers with any sort of easily-mocked nickname.  (I’m the only one stupid enough to do something like that.)

Let’s take a look at three pitchers who could have an impact – either in the rotation or in the bullpen – as soon as 2017…but whose impact could prove vital to the success of the O’s pitching staff in 2018 and beyond.

We’ll call them the Orioles Cavalry 2.0:

Acquired from the St. Louis Cardinals in April 2016 for cash considerations, Jayson Aquino spent most of the 2016 season at Double-A Bowie, where he posted a 4.29 ERA and a WHIP of 1.413 in 19 starts.  Aquino also appeared in five games for Triple-A Norfolk – and three games for the Orioles – during the 2016 season.

The 24-year-old left-hander is now in Sarasota with the Orioles for the first time and he’s making a strong impression.

I know, I know – spring training stats are meaningless and all.  But Aquino has pitched nine innings – allowing just one run and holding opponents to a .182 batting average.  He’s struck out nine and walked just one in those nine innings.

Aquino’s above-average changeup keeps hitters off balance and helps make up for a fastball that tops out around 93 miles per hour.  Aquino reportedly spent his time in winter ball this year working on refining his curveball, which impressed manager Buck Showalter early in camp.

On March 2, Roch Kubatko of Masnsports.com wrote that “Aquino is the highlight of camp, per manager Buck Showalter’s ratings.”

As Showalter told reporters on February 28, “He’s got a feel for the breaking ball now that he didn’t have. I’ll tell you what, he’s been the highlight of the early part of camp for me. You can see why Dan (Duquette) and them liked him and wanted to keep him on the roster.”

Prediction: Aquino spends most of the year in Triple-A as a starter and heads into Spring Training 2018 as one of the favorites to nail down the last spot in the O’s rotation. 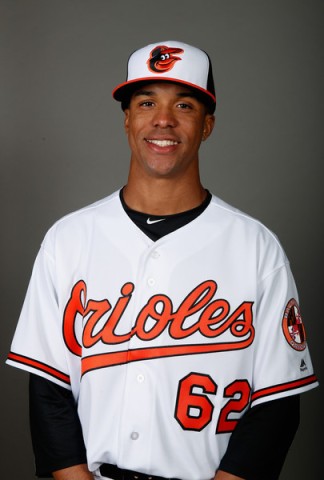 A six-foot-three left-hander, Lee owns a low-90s fastball – that occasionally touches 95 – with good sinking action.  So it’s no coincidence that Lee tends to rack up the ground balls and hear whispers about how his sinking fastball is similar to Zach Britton’s.

On March 11, Showalter told reporters: “He’s got some pretty impressive movement. Late life… The changeup and slider are a little better than he’s carried in the past, but it’s fun to watch… you’re not going to find many guys who are going to pitch in the strike zone. It’s like Zach (Britton). I’m not trying to throw that together with Zach, but it’s a very similar approach. Interesting.”

For the 2017 spring campaign – and, again…I realize spring stats are meaningless – Lee has pitched eleven innings, allowing seven hits and three walks while striking out nine and pitching to an ERA of 1.64.

Lee was impressive when I had the chance to see him in person on March 3 against the Pirates.  After that game I wrote, “Lee looked like a pitcher in control – working quickly, pounding the strike zone and projecting the confidence of a seasoned Major Leaguer rather than a pitcher who has never pitched above Double-A.”

Prediction: Lee spends a good portion of the 2017 season in Baltimore, bouncing between the rotation and the bullpen as needed.

Jesus Liranzo – 21-year-old right-hander Jesus Liranzo was a surprise addition to the 40-man roster back in November so that he wouldn’t be exposed to the MLB Rule 5 draft.

One of the things I find interesting about Liranzo is that he skipped High-A Frederick last season – his first as a professional in the U.S. – moving from Low-A Delmarva straight to Double-A Bowie.

Liranzo is strictly a reliever at this point; he made 27 appearances in 2016 – all in relief – and finished eight games.  Liranzo pitched to an ERA of just 1.87 and a miniscule WHIP of 0.89 in his 53 innings of relief work, striking out 66 while walking 27.

After the season, the O’s sent Liranzo to the Arizona Fall League where he appeared in just one game before suffering a back injury and being shut down for the season.

Early in spring training this year – after catching Liranzo in a bullpen session, Caleb Joseph told Roch Kubatko of Masnsports.com: “I was really impressed with his fastball command for a young kid…I hear he can get up there in the (ninety-) fives, sixes, sevens and even eights. And I was very impressed. For a young kid like that, normally they come out and they’re throwing BBs all over the place, but their location is not as good…I’m excited. He seems like a really nice pickup for us.”

Liranzo pitched another two scoreless innings against the Phillies earlier tonight, bringing his spring ERA to 1.13 in seven appearances.  Liranzo has allowed just two hits in eight innings of work and has struck out ten.  But he has proven Joseph’s scouting report to be a bit off, walking seven batters in those eight innings.

Prediction: Liranzo makes his MLB debut in Baltimore in September and gets a chance to become a key piece of the O’s bullpen next spring.